Just like the aurora borealis, unexplained stains in the toilet and dessert that goes missing from the refrigerator, the occurrence of car scratches may very well be a thing of mystery. Luckily for car owners, car scratches are not always permanent. The next time you discover that your car has been keyed by a psychopath, keep calm and know that there is hope yet for that thing of beauty that’s sitting in your garage.

Most car scratch removers in the market will easily help get rid of minor scratches, swirl marks, hazing and oxidation. However, cars that suffer from deeper scratches may need to be rescued by scratch remover kits that come with touch up paints. If you aren’t so hot in the DIY department, perhaps a visit to the workshop is in order.

There are literally hundreds of car scratch removers in the market, so to say that you’re being spoiled for choice is an understatement. Because most car scratch removers are so affordable, you can easily handle the touch up project on your own. However, there is a chance that some products would not work on cars with expensive auto paint – what was initially used to cover up might stick out like a sore thumb.

Here are several products that may suit your needs in removing scratches – choose wisely according to your usage and budget, and stress arising from laying eyes upon unsightly scratches on your beloved vehicle may be a thing of the past. 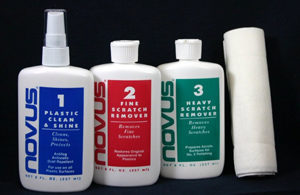 One of the most well-known car scratch removers is, well, not solely a car scratch remover. The Novus 8 oz Polish Kit, Plastic Cleaner, Polish & Scratch Removers will not only remover car scratches, but will also work wonders on plastic aquariums, counter tops, bath tubs, and acrylic surfaces.

Does Novus car scratch remover work? We checked hundreds of reviews to find out. Those who used the Novus Polish Kit on their cars reported excellent results. One person even went as far as to say that this is quite possibly one of the best products to remedy scratches AND protect plexiglass windshields on UTVs, golf carts and airplanes.

Another owner sang praises about the great job the Novus Polish Kit did on ridding his car headlights of scratches and nasty grit. A sports car owner said that spending $16 for this kit was the best decision he made as it made scratches on his rear window complete vanish!

And if you’re a female car owner, you’ll be glad to know that scratches can be rid easily without putting in much elbow grease. In addition, the scratches disappear while leaving your car shiny and glossy!

To be fair, it’s worth mentioning that there were customers who claimed that there are other products that work way better than the Novus Polish Kit, but the positive comments far outweighed the setbacks. For a low price of approximately $16, this set works great as a car owner’s first car scratch remover kit. 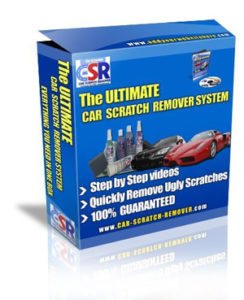 If you’re getting tired of cheap throw away kits that cannot satisfy you when it comes to removing scratches from your car, then The Ultimate Car Scratch Remover System may just be the thing for you. The makers of this system have made this just that – a system, and NOT merely a use-once-and-throw kit.

At $69.95, The Ultimate Car Scratch Remover System does not try to be the cheapest in the market, but without meaning to, it has becomes one of the handiest, value-for-money car scratch removers in town. Not only does it come with step-by-step videos and instructions, the system also comes with car scratch remover products that do everything from remove scratches (duh!), glaze glass and makes dust and grit disappear.

Does The Ultimate Car Scratch Remover System work? We checked hundreds of reviews to find out. Customers who bought The Ultimate Car Scratch Remover System were so impressed with it that they went as far as to say this is a must-buy product. The price was no deterrent – almost everyone said that the system paid for itself right away and was the wisest investment any car owner could (and should!) make.

As for those of the fairer sex, rest assured that the system is not as daunting as it looks. Female car owners who bought The Ultimate Car Scratch Remover System for their husband or boyfriend often said that they soon found out the kit was so user-friendly that they could’ve done it themselves!

The only thing that somewhat displeased customers was the fact that the system does not come with touch up paint to remedy deep scratches. However, for this kind of price, the system works wonders and would be more than sufficient for car owners to fix car scratches and protect their vehicles.

The Ultimate Car Scratch Remover Plus Touch Up Paint Kit 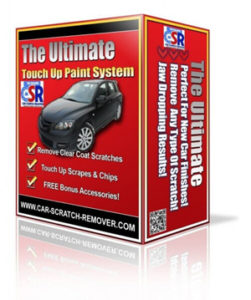 For those who already love The Ultimate Car Scratch Remover System, then why not go one level up and select The Ultimate Car Scratch Remover Plus Touch Up Paint Kit? Granted, this kit costs a little more than twice the price of the basic system by the same makers (full price is $169 but it’s often on sale for $149), but with the touch up paint that’s included, it’s truly value-for-money where caring and pampering your car exterior is concerned.

The makers of the system will ask for your car’s exact paint code when you make your order, so make sure you have that information before ordering. Getting exactly same paint is very important and plays a major role in getting truly professional results in permanently removing scratches AND touching up your car paint.

Does The Ultimate Car Scratch Remover Plus Touch Up Paint Kit work? We checked hundreds of reviews to find out. Many people who purchased this kit have reported full satisfaction as far as results are concerned. Ease of use is superior as DIY car enthusiasts claimed that this product made their lives easier AND helped them save quite a bit of cash. For the uninitiated, a concise guide on paint tools, wet sanding and finishing is provided so paint chips, nicks and scratches may very well be a thing of the past.